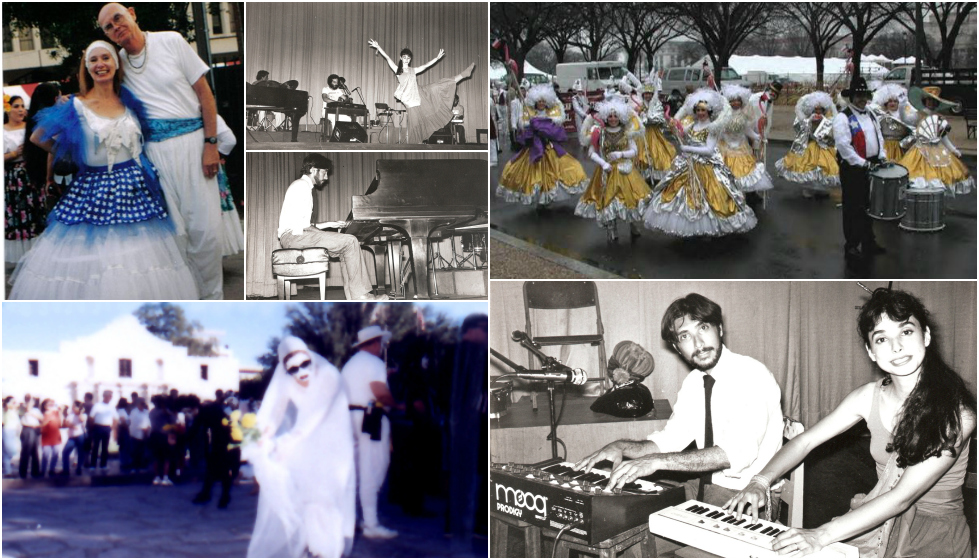 Throughout the 40 years that URBAN-15 has existed, it has gone through numerous changes to its aesthetic, its content, and its methods of presentation. However, it has always remained a group of enthusiastic performers fighting to present new, unique and relevant art forms to the community.

URBAN-15’s first public performance took place at the University of Texas at Austin’s Baseball Stadium in the Summer of 1974. Three instrumental quintets – one located at first base, another at third, and the last deep in center-field – performed on elevated triangular platforms with dancers alongside. The quintets and dancers performed unique, concurrent arrangements while the sounds of a toy piano being played through a ring modulator chimed through a conical PA system providing a thin overhead sound field.

From this unusual start a core group of artists, dancers, and musicians grew into an ensemble of 15 members who dubbed themselves, “URBAN-15”. This ensemble went on to experiment with exploratory sound, environmental, and movement-based performance art in a variety of unique spaces around their urban landscape including parking lots, streets, garages, rooftops, beneath bridges, and inside of drainage tunnels.

URBAN-15 crashed the Houston art scene in 1975, bringing their experience in large mobilization projects and assortment of installation, ensemble, and electronic activities with them. Through collaboration with KPFT’s “Avant Garde Show” and SumArts Experimental Works at Miller Theater, URBAN-15 became a frequent feature at art openings, the Houston Festival, and emerging alternative spaces like Lawndale, SpaceDance Theater, and Diverse Works.

In March, 1979, six members were invited for a month-long residency for installation and performance work development at Media Studies in Buffalo, New York, with run-out performances at the Everson Museum in Rochester and the Smithsonian in Washington, D.C.

The first 15 years of URBAN-15 were filled with enormous adventures and personalities. Here were the seeds of URBAN-15’s arts education programming later launched in San Antonio. This program called simply CULTIVATION was selected as a model program by the San Antonio Parks and Recreation Department. URBAN-15’s ArtsTeach Project was later absorbed by the Department of Arts and Cultural Affairs and continues today under the stewardship of ArtsSA.

Since establishing its home base for operations in San Antonio in 1980, URBAN-15 has gone international, with multiple performances in Mexico, and unforgettable appearances by our performance ensemble at the inaugural parades of presidents Clinton, Bush, and Obama.

To this day, URBAN-15 continues to bring new and unique art forms and education to the community. From Carnaval de San Anto, to the Josiah Media Festival, to the Holiday Laser Show, URBAN-15 has never stopped pursuing its desire to present unique and new forms of art and instill a lifelong involvement in the arts.

Original URBAN-15 members performing “Breaking Down the Motion” in March, 1983